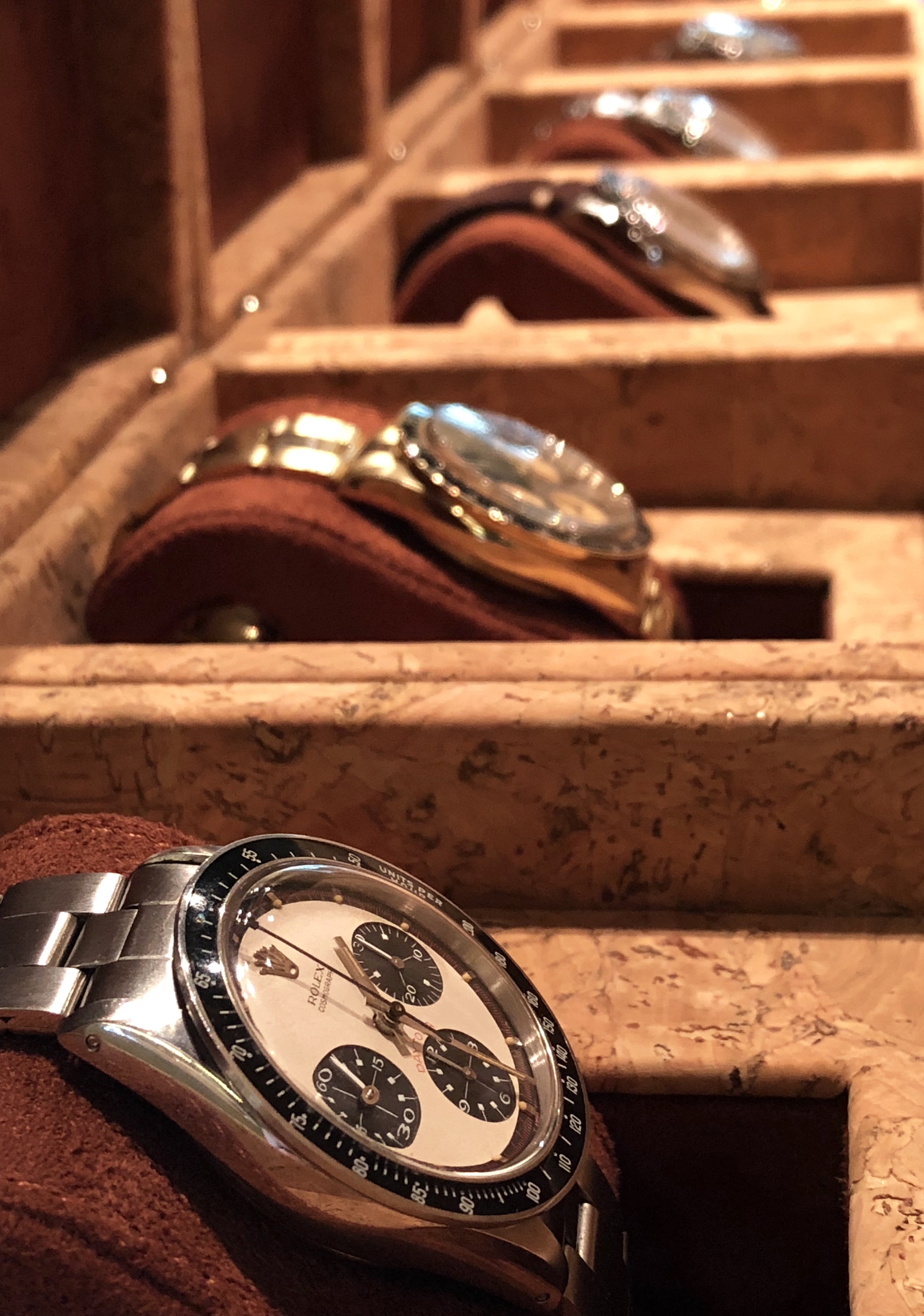 There is no vintage watch topic that does not touch on the prevalence of the Rolex Daytona. Lets all face it, it’s a watch that brings about an unchartered amount of curiosity and lore. Written below we will delve into a brief and very condensed overview of the Daytona family lineup. It will allow you to differentiate one model from another. We will explain where all these terms come from and what they actually mean.

The ever-cool signature found on the dial above the six o’clock sub-dial. Distinctive recognition due to its oversized red color printed “Daytona”. This feature is found on references 6263 and 6265. Found on early Daytona’s and features a double printed “Swiss” on the six o’clock sector of the dial. This occurrence came about due to the presence of a large bezel that covered the lower part of the dials. As per regulation Rolex had to re-print these dials with an additional “Swiss”. A double Swiss print on a dial is coveted and carries a substantial premium price tag.

Rolex vocab is applied when a line of text is floating or suspended below the text or above the chronograph sub dial. Really cool detail to see in person. Another form of “floating” occurrence where there are gaps between multiple lines of text. This detail is prevalent on some gold screw down Daytona’s such as the ref. 6263 and 6265. An Oyster split Daytona is incredibly rare.

The highly lauded JPS Daytona is found on yellow gold models and is fitted on black dialed “Exotic Paul Newman’s” and text is printed in gold lettering. Named John Player Special after its similarity with the color schemes of the 1970’s John Player Special car racing team. There was never an affiliation between the team and the Rolex manufacture.

Is seen on Daytona’s with the “Oyster” print located beneath the “Cosmograph” print. Oyster Sotto’s are found on early batches of the exotic dialed screw down chronographs. Sotto’s are amongst the most coveted variations and those who own them know exactly what they are doing.

Is a Daytona fitted with a white dial accompanied by black sub dials. Much like a panda bear. A double stamped Daytona is the dream for many a collector. A twice stamped dial features the Rolex name but also the name of the retailer that originally sold the watch. Tifanny & Co. remains to the day the most significant partner of the Swiss manufacturer. It is common for double stamped Daytona’s to feature a hand engraved inventory number inscribed on the back side of the case lug.

Are those dials that feature solid white gold indexes and hands. These types of dials are found on both steel and gold models, and they represent an additional step taken in the quality control. A Sigma dial can be identified by observing the small Greek sigma letters printed below the six o’clock mark. Is a dial that has become brown from its original black color. This phenomenon is caused by an error in pigmentation coupled with exposure to UV rays. An evenly brown dial on a Daytona is an unbelievable sight and a detail that drives collectors and auction houses afire. Dial features a short line underneath the text at 12 o ‘clock or 6 o’clock. Rolex introduced as a measure to indicate their transition from using radioactive radium with tritium as the source of dial luminescence. The underline Daytona ceased after dials incorporated the tritium indicating wording conveniently located below the six o’clock marking.