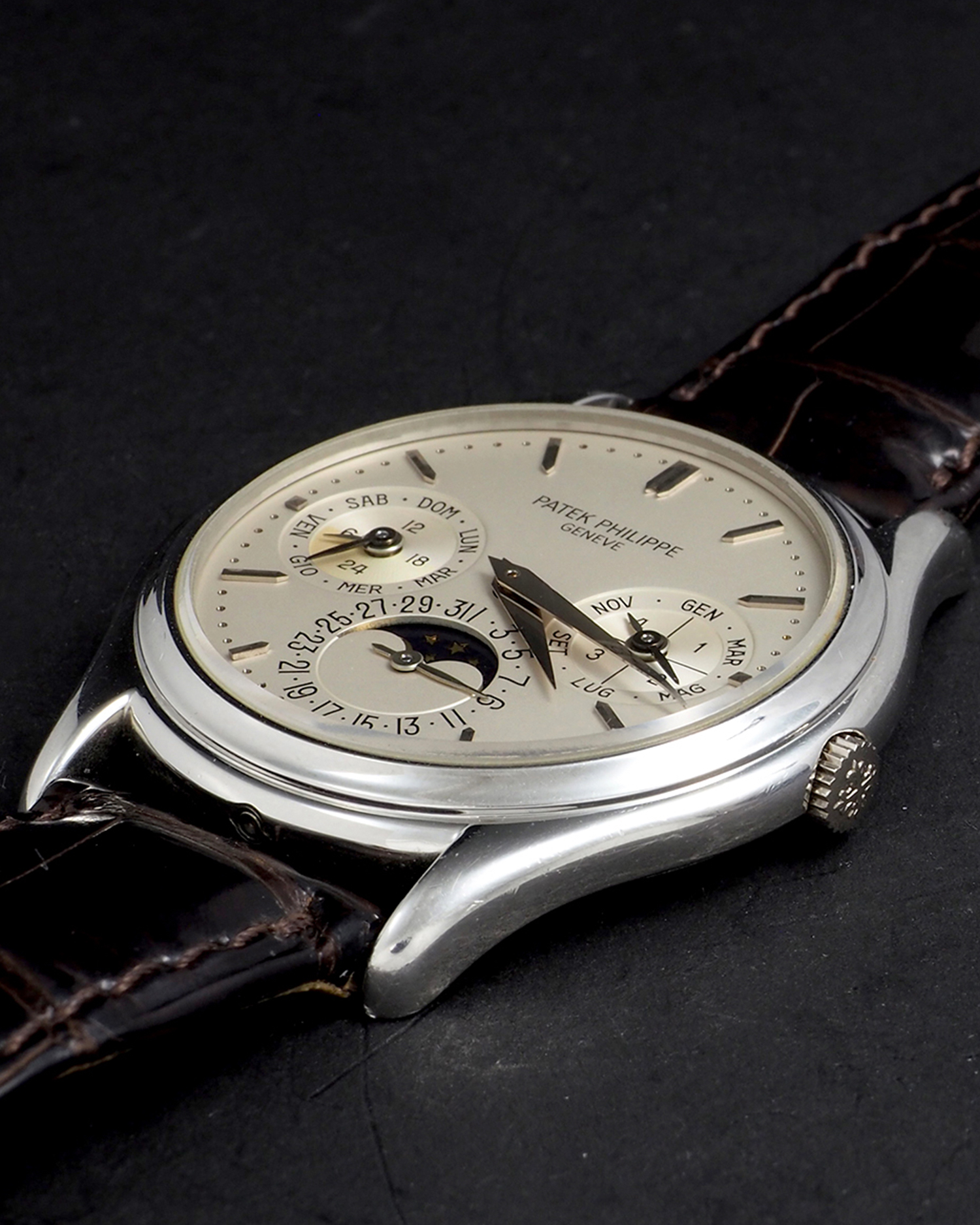 The Patek Philippe Perpetual Calendar ref. 3940 is a watch that nears absolute perfection. There is no simpler way to say it. This watch is downright fantastic. First released in 1985 during tough times but despite the adverse times the 3940 became a rapid success, which led it to a healthy 20 year production span ending in 2006. Genius During Times of Turmoil

The reference 3940 was created to replace the outgoing ref.3450 “Padellone”, a masterpiece in its own right. Originally offered in yellow, white, and rose gold as well as in limited amounts in platinum. As tales go it is said the 3940 became Philippe Stern Patek Philippe’s head at the time go to watch. He was often seen wearing one and was even featured in an ad with the perpetual calendar in his hand. The Perpetual Calendar ref. 3940 was introduced during one the most trying times for the Swiss watch industry. The decade of the 1980’s was saw the rise of the highly controversial quartz movements. The very being of the quartz takeover in Switzerland nearly destroyed the industry. It is estimated that during this time the industry saw its workforce shrink from 90,000 to 28,000 people. The design of the Patek Philippe 3940 is perfect from an aesthetic to a mechanical point of view. Consider that it was Patek’s most complicated serially produced watch at the time. For the lack of technology at the time it would have been thought such complicated watch would have needed a thick and oversized case. However despite everything this was not the case. As a matter of fact the 3940 incorporated all its charm and complication inside a very slim, incredibly comfortable 36mm case. The aesthetic perfection of the 3940 was facilitated thanks to the revolutionary movement inside. Powering the watch was one of the most influential calibers made. The 240-Q automatic perpetual calendar fitted with an extra heavy 22k yellow gold micro-rotor to ensure additional momentum thus more efficient power. In the twenty years of production Patek manufactured many 3940’s and even though various examples can be found at the moment not all are equal. Like with any vintage watch condition is the key and the best way to know if a 3940 is in top condition is by examining the state of the hallmarks. They are noticeably positioned on the side of the case. A strong hallmark indicates the watch has received minimal to zero polishing. Available at Vintage Watches Miami are two mint full set examples of the Patek Philippe 3940. One is in yellow gold and the other in platinum. To browse through our collection of complicated Patek Philippe visit: